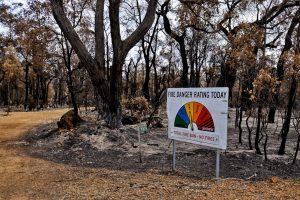 Are Australia’s standards for protecting buildings in bushfire-prone regions sufficient?

Information presented at a 2020 Qld Association of Fire Investigators Inc seminar and findings from insurers and the Royal Commission into National Natural Disaster Arrangements (the bushfires commission) suggest not.

Ferm Engineering CEO Steve Burton told the seminar the Australian Standard AS 3959 for construction of buildings in bushfire-prone areas was inadequate and he wants the Australian Building and Construction Board to adopt the 2012 AS 5414 bushfire water spray systems standard.

“Industry needs to consider more effective design alternatives. Even some buildings that met AS 3959 were destroyed in the 2020 bushfire season. The amount of vegetation and the impact of global warming need to be factored into modern building standards.”

Steve says installing sprinklers in buildings in bushfire-prone areas is a positive pathway to risk reduction. “There’s international and domestic empirical evidence that shows homes with even ad hoc sprinkler spray systems have a high rate of success in surviving bushfires, compared to adjoining buildings without. Combining ember protection construction with sprinklers can be a better cost balance for owners and insurers, and improve survival rates.”

Steve also raised the risk of potential animal feedstock and water table contamination from aerial dispersants dropped from fire-fighting aircraft. “The long-term consequences are unknown, so now is the time to research them,” he says.

As an internationally recognised fire safety expert, Steve is often asked to present his perspectives at seminars and conferences.