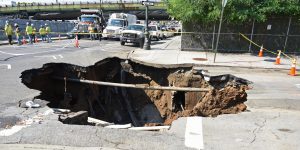 Ageing pipe infrastructure and pressure reductions account for two to three failures a week in Brisbane alone. One of the latest big ones, in June 2021 in Greenslopes, resulted in a fire engine falling into a sinkhole because the ground, undermined by the failing soil structure below, could not hold the truck’s weight.

The major cause of sinkholes is water authorities reducing water pressure. If a leak occurs under high pressure, it is quickly identified because water jets out. But leaks from lower-pressure mains tend to seep out and gradually erode the soil structure around and below the damaged pipes.
Water collecting underground is invisible until the surface layer is broken, then vehicles and buildings can disappear into the resulting sinkhole. This phenomenon has increased after pressure reductions in 2008.

The trigger for sinkholes is water – too much, or too little. Moist soil is normally stable, but too much water, during downpours or when pipes continue leaking unnoticed, can create sinkholes. In droughts, cavities that were previously supported by groundwater empty out and become unstable, again creating sinkholes.

Steve says sinkholes created by reduced water pressure are costly and their increasing occurrence shows urban water management is at fault. Investment to bring the water network back to pre-1970 conditions is overdue, given mains in many suburbs are more than 100 years old.

Large businesses should monitor their water bills to identify any increased costs, as that may help identify potential sinkholes forming in their location.